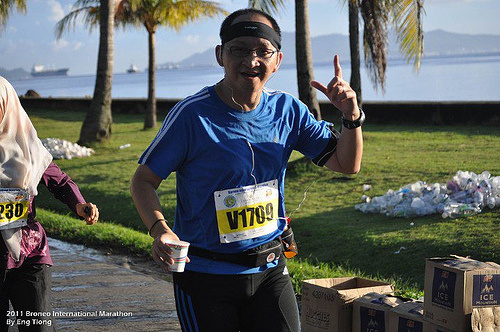 Even though we only slept around 12 m/n (after getting back from the Carcasean boardgaming session), I felt well rested when I woke up around 5ish. The plus point of staying just 1KM away from the starting point (Likassquare Condo) is that you can afford to wake up later and just saunter your way to the race venue. 😛

The races start earlier here compared to KL ie 6 am for our 10K and the ungodly hours of 4 am for the full marathoners! :O The reason is simply the sun rising here 1.5 hrs earlier than KL even though both locations are on the same timezone so a 6 am start here is about equivalent to a 7:30 am start in KL.

By the time we were on the road towards Likas Stadium (start venue) around 530ish, the full marathoners have already been on the road for 1.5 hours. Gosh.

We didn’t actually saunter since we thought it might be good for us to slow-jog our way to the Stadium, which was a useful pre-race warm-up for us anyway.

A view of the dynamic Likas Sports Complexs which houses an Olympic-size swimming pool… this complex is located along the route from our condotel to the stadium.

Likas Stadium is imposing.. It’s the 8th largest football stadium in M’sia with a capacity to house 35,000 fans! Even though it was not even 6 am, the sky was as bright as any morning sun!

We were flagged off sharp at 6 am. No funny celebrity warm-up stuff, no longish speech about nothing, just a quick “Hi How Are You All This Morning” and Bang! Off we go….

The route for the 10K run… starting from Likas, then a 2KM stretch along Jln Tun Fuad Stephen which is the coastline run before we enter the city centre, an u-turn at the 5KM mark and returning in the opposite direction along the same route.

This is the road heading out towards Likas Condotel (that’s the tall buildings after the arch) and another 500m we’ll hit the coastline. 🙂

This being my 2nd (actual) race this year (the first was the now-infamous ENR at Sepang), my plan for this run was simply to take it at a leisurely 6 min pace. The route here is flat. I mean FLAT with no elevation at all so for those with pace to burn, this is actually a good race to do your PB in whatever category you wanna do.

It’s only 1.5K from Likas Stadium to the Tun Fuad Stephen roundabout (above) and from here we turned left and were now running along the coastline of KK facing the South China Sea. Ah.. the sea breeze!

This coastline stretch is about 1.5KM long and it’s really such a blissful feeling running along it with the sea breeze in your face! Priceless experience – especially for us city-folks given only to running in the concrete jungles of KL.

Somewhere along this stretch, I saw the 1st Kenyan runners coming from the opposite direction heading back towards Likas Stadium. It’s just 6:15 or thereabout and with just 2+ KM back to base, this guy was going back with a timing of around 2:30 hr for a full marathon!

At Km3 we start to reach the city centre though the coastline is still very much visible along our route.

The next KM took us alongside one of the newer shopping malls in KK – the Suria Sabah (wonder if it’s related to our Suria KLCC?)

After Suria Sabah, we were running along the Harbour Front (above) which has a 2KM boardwalk (arguably the longest in Asia).

We made our u-turn just before the KK Wet Market (the large covered building above). From here, it’s just the same route back in the opposite direction. Yay! Another 2KM of coastline run!!

The 21K and 42K went on further down this route… past Le Meridien KK, all the way to Sutera Harbour until they reach Tanjung Aru where their u-turn was.

This was a picture of me stopping for a cuppa of Gatorade at the 7KM mark, taken by Tey. See the coastline in the background? 🙂

The last 200m was on the stadium’s soft track..  My Garmin tracked my time at around 59+ min but there was no official time for me as there were some problems with the race bibs they used for this race.

However the BIM organizers were more than willing to help you check your official time from their data if you provide them with sufficient info. A quick email exchange with (the late) Andrew Voon gave my official time as 59:03 min. Sadly, there was probably the last email exchange I’ll ever have with Andrew as he passed away suddenly last week.

Overall this was a well-organized race (compared with the ENR, haha), started on time, routes well-marshalled, drinks available almost every 2-3 km (for 10K route) and your goodies like finishing medal, t-shirt and a wet towel were handed to you at the finishing line (makes it easier rather than having the runners queued up for this after crossing the finishing line).

Kudos to Andrew and his organizing team. BIM is a relatively new race (this is their 4th year) and I wish they’ll continue to grow from year to year.

I enjoyed this run a lot.. Probably the best run in all the races I’ve done. Think part of the reason is that I did not set any finishing target for myself and just decided to do a 6 min pace. I find that at this pace I can just coast along and in the morning air of the South China Sea, while running my mind reflected on where/what/who/why/when/how of my life and I probably achieved clarity in some aspects of those contemplations.

I’ll certainly be BACK here for next year’s run!