One of the key events of the Madrid Rock & Roll Marathon is arguably Europe’s largest Health & Fitness Expo (with most vendors displaying running related merchandise) held at the Pabellon de La Pipa, which is the venue where we’ll be collecting our race pack. The Pabellon also hosts the Pasta Party tomorrow – free to all registered runners plus one guest. 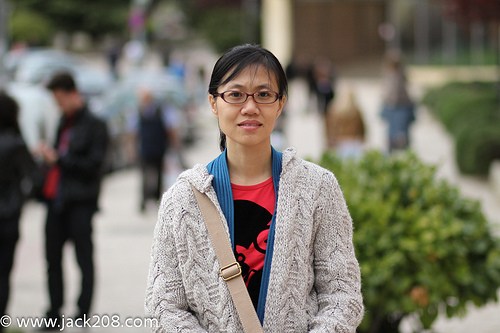 Getting around Madrid is pretty easy with a wide Metro network that connects the entire city. The Pabellon de La Pipa can be reached from the Alto de Extremadura Metro station on Line 6 (Circular Line). Sounded easy. 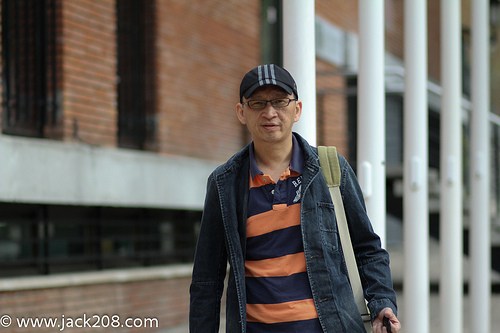 But we were a little lost when we first came out of the Metro station and found ourselves in the middle of a suburb. Doesn’t look like a Pavilion or Convention Centre of sorts anywhere near.

Walked around, asked for directions – and this was where it got tricky coz not many locals understand nor speak English well – until we saw a young man carrying an Adidas Madrid Marathon bag. And he looked more American than Spanish. Viola. He speaks English! A few pointers and soon we found ourselves at the Pabellon de La Pipa. The Alto de Extremadura station is the correct drop-off point except you need to know which direction to head off for the Pabellon.

The Pabellon is located in a very green park called the Casa de Campo, I suspect Madrid’s largest park which used to be the royal hunting estate of King Filipe II. Among other attractions, it has a lake, the city’s zoo and an amusement park. However the Retiro Park where we’ll end our race is the more popular park in Madrid even though it’s smaller.

We didn’t get to visit the zoo in this trip… next time? 😛

Relatively easy affair. Not much of a queue. The race pack collection started yesterday (19/4) and runners can still collect their race pack till end of tomorrow. Plenty of time for everyone to come and get theirs. Counters well staffed and they were quick to grab your pack for you. We collected our race pack and bib, and were told to follow the “green line” to collect our Adidas running vest.

P/s Full marathon runners followed the “white line”. The “green line” led us to the running vest collection counters which were placed at the end of the expo hall. I suppose the reason they separated the race pack and running vest counters was to make us follow the “green” (or white) line which would take us past a few key exhibition booths. 😛

We saw Adidas, K-Swiss, Brooks, etc along the way.

The race registration – if I remembered it correctly – didn’t ask us to choose our t-shirt size. We were allowed to pick our size here. I opted for “M” while waiyan took “M” instead of her usual “S”.

The lady at the counter thought I should take a “L”. Hmm. I must look fat!

Nice Adidas technical vest of very good quality, green for 10K and blue for full marathon. Interesting that the Male-ver has a sleeve while the Female-ver is sleeveless. In M’sia it’s likely the other way round, for modesty reason. Heh.

Note: Yum – another Malaysian runner fren taking part in this race – was not so lucky. He came (with Jenap and Razak) on Saturday to collect theirs and found they’ve ran out of his preferred size and he has to take a “L” size (and hopefully have it adjusted back in KL). 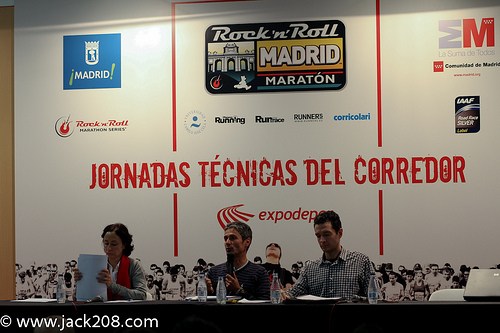 There was a press conference in the Expo when we were there. According to waiyan, those people in the presscon appeared in one of the running magazines included with the race pack. The magazine’s in Spanish so we still don’t know who they are. 😛 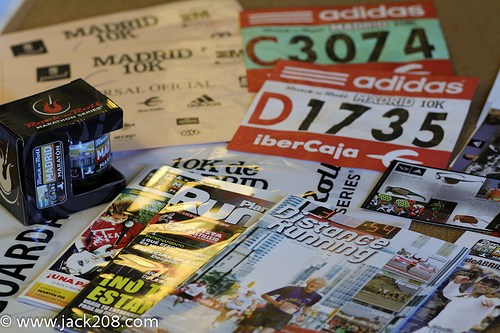 The Race Pack – beside the bib – contained a few running magazines, some flyers of running events (in Spain), a nice Madrid Marathon mug (the full marathon runners do not get this mug but they got a Madrid Marathon backpack instead). 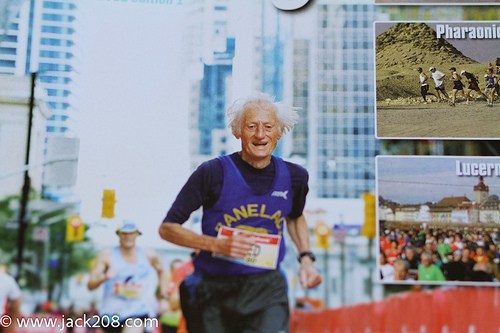 The magazines were interesting read. From one of them – Distance Running mag – I learned about Ed Whitlock (above), an 81 years old veteran runner who just broke the Over-80 record (which was also set by him) for the full marathon with an improvement of 10 min to 3:15:54. At the time I wrote this, he’s also the only person over 70 years old who can finish a full marathon under 3 hours!

Let’s put it this way; completing any one of the above would be considered a great achievement. Completing ALL THREE of them? Speechless…

New Running Shoes for Madrid
Both me & waiyan ran on the K-swiss Blade Light Run shoes, and we love this shoe so much we were looking to get another pair before they “obsolete” this model (we can see this happening with K-swiss coming up with Blade Light Race, Blade Light This and Blade Light That….).

Not easy to buy K-swiss shoes locally in KL; Running Lab (Frank) in Tropicana Mall do carry K-swiss but usually they either don’t have the color I wanted or the size (USA 11 or UK 10 for myself).

There’s a promo here for the Blade Light Run at just Eu85 per pair (and with the Euro at a nice 4.05 ROE, this has to be an offer not to be missed! Plus they’ve new colors – purple and pink – for the ladies model. I though “pink” looks better but waiyan decided on the “purple” to coordinate with her wrist-wrap and RoadID bracelet. Le vanity of le woman. 😛

I would have loved to get this “color” (above) but were told by them this model is only coming out in September (Fall) this year. So “blue” it is for me now. Will surely look for the above color when September comes. 😛

Rock & Roll Series finisher medals
On display in the Expo were finisher medals for some of the R&R Marathon series which is held over more than 26 cities in the USA and in Europe, the race is held in Edinburgh, Madrid, Lisbon and Dublin. 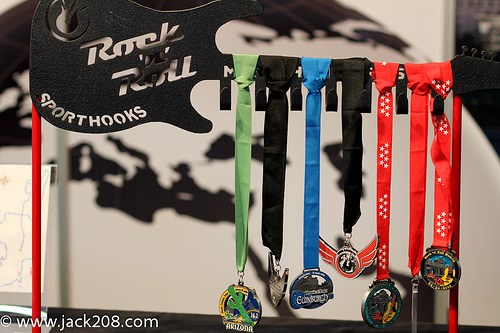 The Finisher Medal for the R&R Marathon allows for engraving of your name and finishing time at the back of the mdeal… Nice touch. 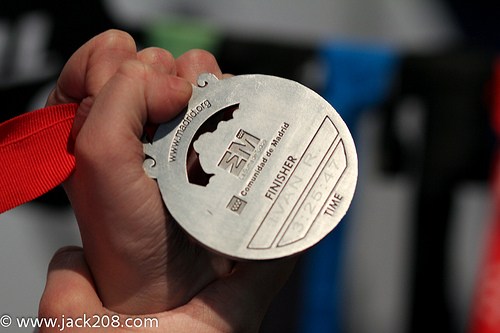 And if you complete two or more races in the Rock & Roll Series within a single calendar year, you get to take back a special Heavy Medal award and call yourself a World Rocker! 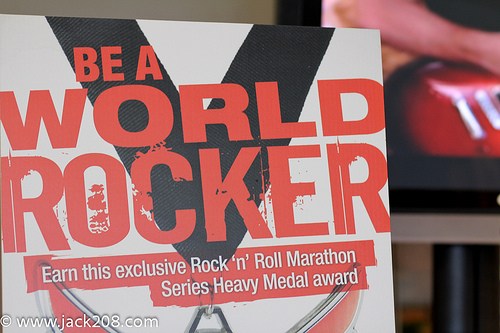 Finally both the Full Marathon (Green) and 10K (Black) finisher medals for the Madrid Rock-n-Roll series on display. We’ll be getting ours this Sunday, yah!

The Adidas booth has a nice wall that says “And you? Why do you run?”
(waiting for my Spanish fren to revert with the translation) – thanks patomas!

SKECHERS was there in full force!

So’s K-Swiss but this you already knew. 😛

Adidas too. With some souvenir Madrid Maraton t-shirts.

Waiyan having to re-arrange all the stuff we brought – or bought – from the Expo. 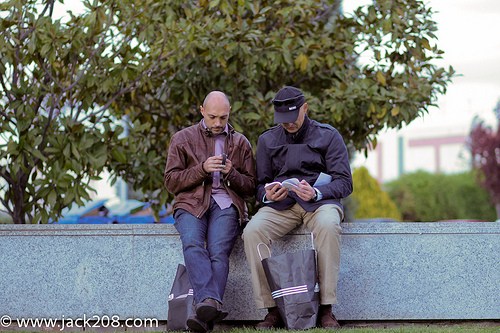 They carried the Adidas Madrid Maraton race pack bags… but I tell you, they looked more like spies to me than runners! 😛 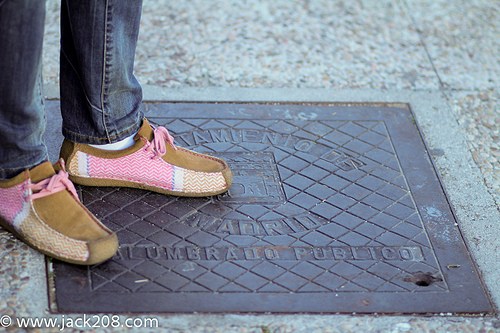 Saw this handsome German Shepherd walking around on his own near the Pabellon de la Pipa… trying to get a drink from the bottle. He has on him a tag (the red colored medal tag) that says “Policia” so I guess he has the authority to wander around. 😛

Commentary: He’s large and looks menacing, but was not a threat to anyone. He’s walking around without a leash! Goes to show if dogs are properly trained and handled by their owners, they do not exhibit violent behavior. In contrast to some of the recent local incidents involving “violent” dogs, the problem lies with moronic owners rather than the dog itself. Le Sigh.

What’s next? A trip to one of Europe’s famous footballing icons – the Santiago Bernabeu Stadium, home of Real Madrid FC.

To view all the photos taken in our trip to the Pabellon de la Pipa, check out my photo album in Facebook
– 20/4/2012 Pabellon de La Pipa